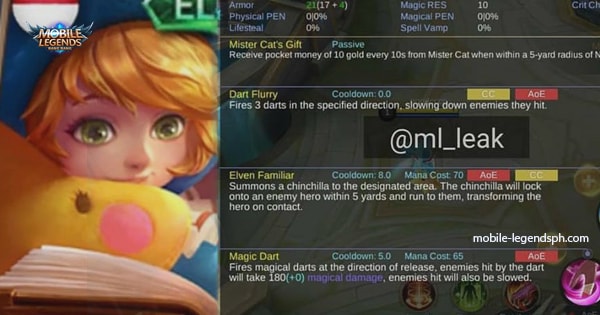 Nana has been one of the most popular heroes in the game, being a pioneer in the game for so long, it is no wonder why she is still there being played by the other players for being a fun hero with a quirky mechanic. However, she would have a rework and it is a massive one.

We are talking about a full-scale rework of skills in which all of her skills would be changed and possibly move the role as well. Here are the details we got so far via @ml_leak.

Description: Receive pocket money of 10 gold every 10 seconds from Mister Cat when within a 5-yard radius of Nana.

Insight: This replaces her old passive, Nimble, which gives out movement speed when her ability hits an enemy.

These two skills are different from each other as from a mobility passive that lets you chase down enemies, you get a gold dependency on your passive.

Launches a magical boomerang in the specified direction. Each time the boomerang hits an enemy, it will deal magical damage and slow them.

Insight: This is quite an upgrade from the old first skill, Boomerang which basically does the same, however, it just deals damage and that’s it.

Magic Dart now gives you a “soft” crowd-control effect which slows an enemy down. This would be useful when in a team fight, you would dart an enemy to ensure a kill on the enemy side. Pretty useful so it’s an upgrade from Boomerang.

Summons Molina o the designated area. After a short delay, Molina will lock onto an enemy hero and chase them, transforming them into a cat spirit while dealing magical damage and sowing them. Transformed heroes have reduced Armor and Magic Resistance.

Insight: This ability changes the Morph Spell from the old Nana. In my opinion, it would have to be a downgrade unless the execution appears otherwise.

In Morph Spell, you would only need to select an enemy hero to transform or polymorph them. However, in the new skill, they would need to make sure that the chinchilla is locked into the desired hero within the 5-yard radius making it hard to do since there may be another hero in the 5-yard area so it may select a wrong target, furthermore, Morph Spell has magical damage too, but in Elven Familiar, there are no indicators of a magical damage happening when hitting.

Making it more of a support spell or a CC spell rather than the past which can be used to damage the enemy hero as well. So it would have to be a downgrade.

Summons Molina to the designated area to attack 3 times. Each attack deas magica damage to enemies in the area and slows them. If Moina hits a single enemy twice in a row, that enemy will be stunned.


Insight: This is more of an upgraded Magic boomerang but this time, it would release 3 darts in a specific area. Sure you have the slow as the CC but it lacks the killer potential of the old skill, Dragon Cat Summons which not only summons a cool dragon cat but deals tremendous amounts of damage and make them airborne, one of the harder crowd control effects rather than just slowing them.

This would make her just a shoot at a location and slow them in the process, might be useful as it is a CC still, however, the old skill is still better than the new one.

Those are the Nana reworked skills, don’t take my word for it very far.

Remember, the gameplay still determines if Nana is a lot more viable and the rework makes her a little bit stronger. This is just the gist of the comparisons of her new skills to her old skills.

Her old skills focus deeply on CCs and mobility to chase down the enemy heroes. In the new ones, it does have in all of the skills but it would have more soft CCs with the first skill and ultimate rather than the old one.

Nana early game would be a little more efficient however when Mr. Cat is nearby because of the passive. Every gold counts in the early game as you try to snowball in.

With her new set of abilities, we could still classify Nana as a mage with all those magical damages she can deal but with all these new abilities making her more of a magical damage hero, she may also be a carry at the bot lane for those darts or a support with the transformation CC.

The verdict will be more explained once Nana is released and more information has been fed to the public. For now, leaks would be our best bet and the leaks say this information as well.

A little side note to Nana’s first and ultimate, despite being said that it fires a dart, it has been marked with the leaks that it is an Area of Effect (AoE) skill.

Since there are no video leaks of the gameplay we will never know until a preview shows since darts are supposed to be hit on contact, unless it is an exploding dart then it would serve better justice as an AoE.
And that is all we have today for the Nana rework.

Are you excited about the new change or are you disappointed with the future rework? For more information about the Mobile Legends’ heroes and their reworks, stay tuned!