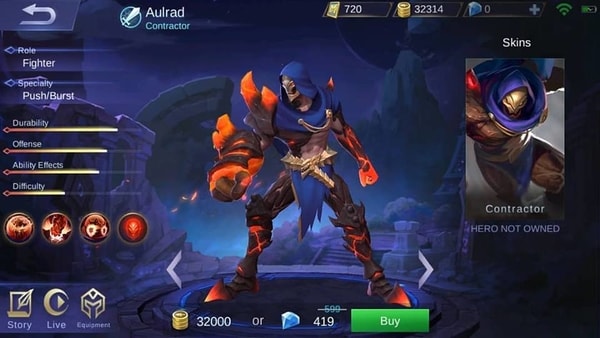 Aldous is another hero you need to try. Its role is a burst/push fighter that uses inner energy to boost his attack damage.

Hero Specialty: Aulrad is a highly-dynamic fighter who has the ability to locate and hunt down enemy heroes on the map and can permanently raise his attack power.

Contract: Transform
Passive
After every 2 attacks, the 100% damage dealt by Aulrad's next attack will be transformed into a shield that lasts for 3 seconds. Activates every 3 seconds.

Contract: Soul Steal
Cooldown: 5.0 Mana Cost: 60 Damage
Aulrad unleashes his inner energy to strengthen the next basic attack. Deals 50 (+100% Total Physical ARK) points of Physical Damage. If this attack eliminates the enemy hero or unit, the additional damage of this skill is permanently increased by 40/20 points. When attacking minions or monsters, the damage of strengthened basic attacks is raised by 100%.

Contract: Explosion
Cooldown: 15.0 Mana COst: 80  CC BUFF
Aulrad assumes a defensive stance that lasts 2 seconds. During this time, Aulrad is immune to basic attacks, while damage from other forms of attacks is reduced by 30%. After 1 second, he can reactivate to end it immediately, his scute will explode, dealing 200 (+20% Total Physical ATK) points of Physical Damage to surrounding enemy units The Defensive state will cause a stun effect for 1 seconds at most.
Contract: Chase Fate
Cooldown: 60.0 Mana Cost: 150 Blink Burst
Aulrad gains the ability to see the positions of the enemy heroes for seconds. During this time, if Aulrad uses this skill a second ti,e while it is still in effect, then he permanently sees the position of one enemy herp. When Aulrad hits that enemy hero, he will deal 400 (+100% Total Physical ATK) points of Physica Damage and Cause 1 seconds of knockback. ending this ability early results in a 30% increase in cool-down time.


He is now available on the advanced server. Test if it is worth it to buy or not.

And that's all we have for now for Aldous. For more Mobile Legends updates, Stay Tuned!.