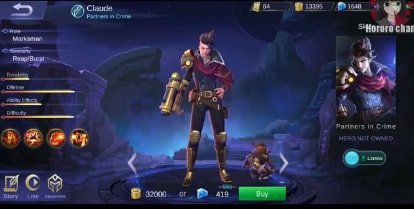 They are two if you consider the monkey as another individual but they stand as one. Claude has an armed gun within his arm and Dexter has his own as well and they can attack you both.

Yup, both of them fires their weapons in the basic attack, it’s powerful especially if you ignore it and remember that Claude is a marksman so he will build attack damage to carry the game so watch out.

His abilities are pretty great that captures the meaning of a thief as their moniker says they are thieves and as thieves, they should be mysterious, cunning and swift. That’s the basic overview of Claude’s skills without saying the description first hand. 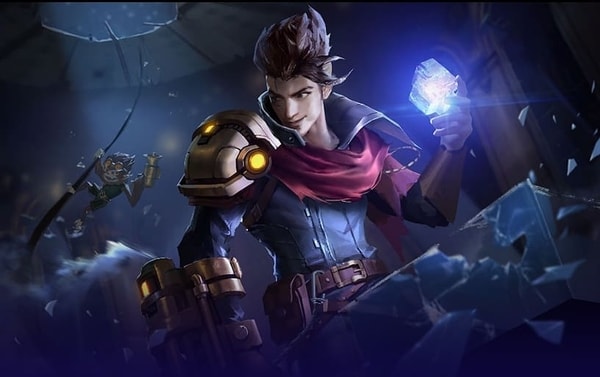 If you often go to the tavern, then you surely have often heard of Claude. His story is one of the favorite topics of tipsy travelers – One of the most famous legends in the Land of Dawn.

Rumor has it, that this teenage human has a special talent for thievery. To Claude, thievery is an art from rather than a crime. In fact, Claude would often a send his victims a notice to let them know when he would commit the crime.

Much to everyone’s bewilderment, Claude always succeeds in acquiring his targeted object, regardless of how strong or prepared are their rightful owners. Whether if the target is a king’s heavily-guarded treasury, a magic library protected by powerful spells, or a dark fortress filled with the undead – Nothing can stop Claude from taking what he wants. It is said that this young “Thief King” has a mysterious partner in crime. Some say his partner is a beautiful maiden, other’s say it’s his twin brother.

However, most people believe in the version of the story where Claude’s partner is a wizard who practices black magic – This version quickly gained support after one of Claude’s victims recalled hearing an odd laughter. In recent times, Claude is said to be eyeing the latest research of the famed machine specialist in the city of Antoinerei, Dr. Rooney, who is said to have invented a device that would allow its user to freely travel across the planes of existence and create mirror images.

The Captain of the Guard, Bruno, caught wind of Claude’s hallmark notice and installed monitoring devices all over Antoinerei to catch him. As soon as Claude entered the city, he was caught by the City Guards and placed in an inescapable prison that utilized some of the best technology. Just when everyone thought this was the end of the Thief King’s reign, Claude’s mysterious partner helped Claude escape from the prison. Not only that but they also successfully stole Dr. Rooney’s new invention from his lab, just as promised on Claude’s notice. As a triumphant Claude left Antonerei, he noticed that Dr. Rooney’s device had a small note: “I hope you make the best use of this device. If you happen to have any ideas for improvement, you must write to me! – Rooney”.

Now let’s head on the affinities of Claude. As a marksman, expect Claude to be a little bit squishier than any other champions, marksmen should not be tough in battle and must be protected by their team support or tank in order to dish out damage to the enemies, which brings up Claude’s offensive capabilities.

Claude’s offense is the most important aspect of his gameplay. Especially since we talked about earlier that Dexter joins the fray in shooting you whenever Claude attacks as well, making you receive two auto attack damages at the same time, although Dexter’s shots are weaker, it can still be relevant especially in the mid to late game.

So Claude will be a great glass cannon that can hurt the enemies even harder once ahead. His abilities will play a factor if he can use it finely.

Especially if you need to escape, elude or fool around with your enemies and avoid feeding them yourselves. Claude’s kit consists of spells that can play around with enemies and avoid them from hitting you, this also means Claude is mobile and can avoid fights and escape at sticky situations. Overall, Claude is a difficult hero to master with all those things to consider, repositioning and avoiding being caught by the enemy should be his priority in order to deal damage enough and be ahead in the team.

Claude can be deadly if sticky situations would happen though and would be a game changer for the game if activated.

Either way, as marksman rule of thumb, having the proper position and avoiding getting killed in a team fight is the main priority and that includes Claude.

His partnership with Dexter is strong but can you expand their horizons by getting a little bit more juice for the victory. That’s all up to you.

Dexter and Claude launch an attack together. If Claude is in mortal danger, Dexter will active his defensive measure to protect his beloved partner.

Cooldown: 50.0 Mana Cost: 150
Claude and Dexter unleash a barrage attack, dealing continuous damage to enemies within the duo's surrounding area. Hits enemy units once. The attack damage is considered a basic attack and triggers the effects of Claude's basic attacks.

His partnership with Dexter is strong but can you expand their horizons by getting a little bit more juice for the victory. That’s all up to you. Watch Claude Gameplay below courtesy by Hororo Chan.

And with that, this is Claude’s overview and description, are you excited to use this hero in the game, for more information about new heroes and updates from Mobile Legends, stay tuned for more!
Next Post Prev Post