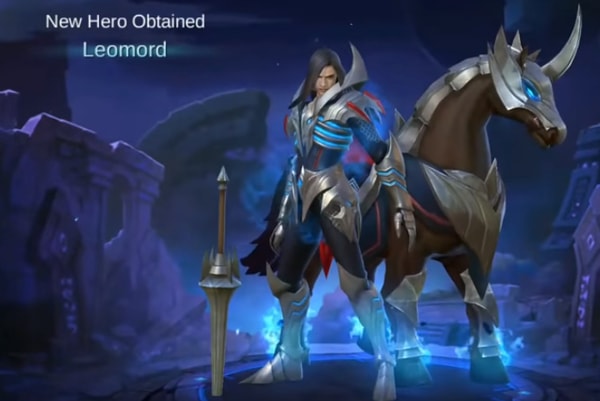 Leomord is a fighter and specializes with pushing potential and bursting down enemy heroes meaning he can be a force to be reckoned with in lane and can push alone and fast since his abilities can kill off a lot of enemies, minions and champions alike. One of the spiciest things, this hero have is that he has no mana so you can just use your abilities without worrying that you will not have mana, energy or any other secondary resource that your skills require you too. In short, he can spam if he has the proper cooldown reduction items and purpose to spam. So beware of this hero when he becomes fed because it could get dangerous once he gets going.

Leomord has these affinities for his overview. His durability is high and way above average which is very understandable for a fighter like him which can be proven with his one of his abilities that has a shield. Also, he can be durable since he can escape with mobility and his ultimate just does that as well. His offensive capabilities can deal quite a punch after all, his skills deal a lot of damage and going all-in against him is a bad idea unless you are in par or a lot more fed than him. Use caution whenever facing Leomord. His ability effects are not so stellar since he relies on his offensive matters.

However, his abilities are something to be noticed since it can deal lots of damage which can be said that his abilities matter on the offensive area rather than the effects like crowd control. Finally, his rated difficulty is not that hard and is rated on average since he is not a hard hero to learn and can be strong in the proper hands too.

He has a story to back up his awesomeness too. He is a well-renowned warrior before the Fortress of Despair have been converted into the undead bastion as it is today. The Kingdom was once a beautiful and rich kingdom and he has the oath to protect the King and Queen of the Kingdom which turned out to be Vexana. All the evils in the world, Leomord would fight for his kingdom, however, the one that made it evil and undead was the one he swore to protect, because he could not escape this fate, he took his life rather than fighting his liege. With the Fortress of Despair almost taken over by Tigreal and the Expeditionary Forces of Light, Vexana remembered Leomord, his loyal retainer.

Leomord’s resolve is hard to control and he cannot be manipulated by Vexana but without a choice, she awoke him on his slumber and came to remember Leomord’s oath to protect the kingdom and she told him that the undead were once the people he tried to cherish. Seeing sense in her words, Leomord once again mustered his courage and together with his horse, Barbiel rode to the battlefield to fight off Tigreal.

Leomord wielded the Oath Keeper his famed sword. He demolished one after the another until Tigreal himself challenged Leomord. Albeit, no declared winner was said, Tigreal realized Leomord’s despair and grief while challenging him. It was said that people know their enemies whenever they cross blades, this may be true for Tigreal on Leomord. And that was the day he knew he met a great opponent in the embodiment of Leomord, the Hell Knight.

Before we wrap this up, we would like to add some information about his abilities, just like Lapu-Lapu he has two states and these two have a combined 5 skills altogether, his unmounted form gave him 3 abilities and the ultimate transforms him into a mounted form which has 2 more skills that is almost equivalent to his unmounted skills however much stronger and harder. He can also deal damage while moving in his mounted form, which makes him mobile enough to trade damage with opponents. This might spark interest for those who love to have more than 3 abilities. So if you like what you are reading, you might be interested in Leomord.

Leomord's basic attacks will deal guaranteed burst damage if there is a nearby enemy hero with below 40% HP.

Leomord immediately gains a shield and can charge his attack. He then deals 450 (+120% Total Physical ATK) points of Physical Damage and slows enemy units by 60%, within the damage area. The longer Leomord charges this skill, the higher it's damage. Any actions that interrupt Leomord's charge automatically triggers the attack.

Leomord quickly travels in a square shape, dealing 300 (+50% Total Physical ATK) points of Physical Damage to enemies near his path and destination. Slows enemy units by 50%.

Leomord calls for Barbiel, his steed, to rush into the battlefield. Barbiel deals 350 (+100% Total Physical ATK) points of Physical Damage to enemy units in his path, slowing them by 50%. If Barbiel comes in contact with Leomord, they will enter a mounted state. While in a mounted state, Leomord gains a whole new set of skills. Leomord's can use basic attaacks within a circular area, even while moving. Additionally, Leomord increases his movement speed and physical/magical defense by 40 points.

Leomord's basic attacks will deal guaranteed burst damage if there is a nearby enemy hero with below 40% HP.

Barbiel leaps forward, dealing 375 (+100& Total Physical ATK) points of Physical Damage to enemy units in the area where he lands, slowing them by 60%.

Barbiel charges forward and knocks back all enemies in the lane. Deals 300 (+50% Total Physical ATK) points of Physical Damage.

Leomord calls for Barbiel, his steed, to rush into the battlefield. Barbiel deals 350 (+100% Total Physical ATK) points of Physical Damage to enemy units in his path, slowing them by 50%. If Barbiel comes in contact with Leomord, they will enter a mounted state. While in a mounted state, Leomord gains a whole new set of skills. Leomord's can use basic attacks within a circular area, even while moving. Additionally, Leomord increases his movement speed and physical/magical defense by 40 points.

And that’s all we got for Leomord right now. His story is indeed interesting and time will tell if the player base will grow to love and use him or hate and ban him to avoid dealing with him. But for now, that is it. If you want to know more about Leomord and Mobile Legends, stay tuned for more updates!
Next Post Prev Post