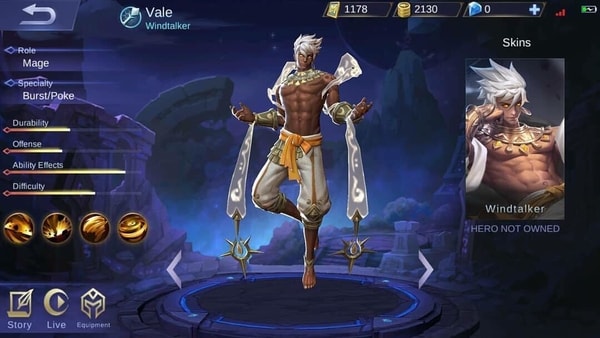 The storm rages and it will crash upon his enemies as he has total command of the wind and he can cast tornados that will send his enemies away. And every time, he can use his ultimate, he gets a power spike, caught your attention yet?

Well, keep it that way while we describe the incoming mage hero of the game, Mobile Legends.

Vale is a mage which has great capabilities to burst or poke enemies within their range, his abilities are reminiscent to League of Legend’s Janna but the difference is that Vale is a more offensive-based hero and can go toe-to-toe with the mages in the mid lane with ease.

With long-ranged spells, he can poke enemies and punish them if they are at the wrong place at the wrong time. His abilities are focused on the wind and it can deal massive AoE damage since tornadoes blow everyone in their path.

Be careful in approaching him as he is a burst champion that can pin you down before it is too late.

His passive is somewhat similar to League’s Kha’Zix which can evolve his skills, this time it can upgrade it to become more powerful by either damage or range or more crowd control. It gives you the freedom to adapt to the enemy team composition and play the right maneuver.

As a mage, here are his affinities throughout the game. His durability is a mediocre one as it sits in the middle ground of the bar.

So his health is standard and he won’t be tankier or squishier than the mages in the game, which makes him great if he can play his cards right and survive in the team fight.

His offense is a bit weaker than the mediocre level which is pretty understandable for a mage like him. He doesn’t need to have physical attacks as his main damaging option as the next affinity is the one you should focus on which is the ability effects.

Ability effects or one’s affinity to conjure spells and skills to inflict damage to the enemy is the main focus of Vale, as he wields the storm and tornadoes, he needs to amplify his ability by buying magical items that boost ability power. In this way, you can maximize Vale’s potential.

Passive
Every time Vale upgrades his ultimate, he can improve one of his skills.

Cooldown: 11 Mana Cost: 90
CC
Vale sends a whirlwind forward. Deals "340 (+120%)" points of Magic Damage when the whirlwind hits an enemy unit. When upgrading his ultimate, Vale can choose to add a stop-on-hit effect or a knock-up effect to this skill.

Cooldown: 45.0 Mana Cost: 150
Burst
Vale summons a windstorm in a designated area. After 1 seconds, the windstorm will explode, dealing 750 (+180% Total Magic Power) points of Magic Damage. When upgrading his ultimate, Vale can choose to increase damage or to add control effect to this skill.

Overall, his difficulty can be ramped up to above-average, his skills are more or less based on the ability of making it hit, they are skill shots after all so it matters if you make the accurate shots or not. If you do, however, you can expect that you will deal a lot of damage as he is a burst mage hero.
And that’s all we have for now in Vale. He is an upcoming mage that can be used to burst down enemy heroes and he can adapt with his ultimate upgrades to ensure that the game is under his control and you gain your victory so once he’s up and you like his play style, buy him!