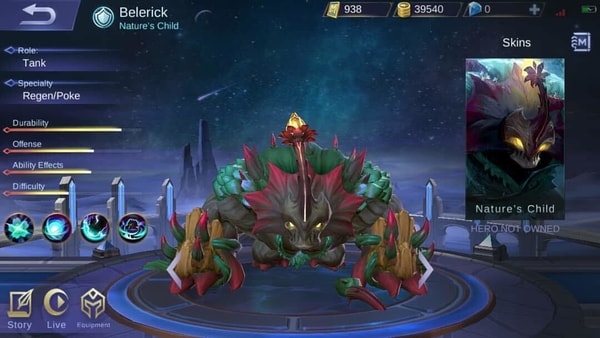 Belerick is the newest hero in the game and he has a crazy amount of interesting abilities and affinities in the game. He can be treated as overpowered by the others due to his abilities and his scaling that can be massive once touched by the more experienced players.

Belerick is not that hard to play, but those who know how to play around the items and his abilities can make Belerick a strong contender for the meta.

He has affinities that are amazing for a tank.


First, of course, his durability is incredibly high for a tank, his abilities that can heal and absorb a lot of damage is noticeable in his sample gameplays that shows his dominance on that side. However, what is interesting is that his offense and ability effects are not so low.

His offense can be considered great because of his ability effects. His offensive abilities are the reason why he can be so strong. Those two pairs up so well that it is absurd.

Of course with this being discussed you can tell that he is a fairly easy champion to control, but mastering it would take another level of play for Belerick players.

So what does Belerick have to offer for you players? First, his passive can reflect damage if someone has dealt damage and especially has a mark on it.

Remember, he has a lot of magic damage as his damage output, so build items that emphasize magic damage. However, there is another reason why Belerick’s passive can be so amazing.

You can buff your health by 30% with those items so make sure to build him a tank or you may not reap the benefits.

You may ask how to get the mark?

The Flower of Life

Simple, the first ability helps you with that. You can mark the enemies with that ability together with a spell that can disappear once it has been inputted in an enemy, making it hard for the enemy to find out if they have been marked or not.

CD: 8.0 Mana Cost: 30 BUFF CC
Belerick Sacirifices his HP for 50% increase in movement speedand strenghtns his next basic attack. HIs next basic attack deals 250+ 6% then recovers HP (dependent upon on his HP loss).

The second ability acts like a high-risk high reward skill, but it’s most likely used to chase enemies. It reduces your health to have movement speed and empower your attacks, but once you hit the enemy, the damage will be great and you will recover that HP, so before you gamble, make sure it’s possible!

CD: 40.) Mana Cost: 150 Heal BUFF
Belerick recoers 10% of his HP and creates a Guradian Area. Belericktakes 40% damage dealt to aliied heroes that are within this area. He slso receives 30% less damage himslefwhen he is in this area.

Finally, his ultimate is a great life-saver for your teammates and yourself in the game. Belerick creates an area where you are healed first then your teammates can have reduced damage because you catch it. However, the damage you receive in that area is also reduced as well, making your whole team tankier in the vicinity.

Belerick has a lot of uses from being a standard tank, an offensive tank and also a utility tank. It depends on how one uses him as a hero. That being said, we help that you are excited for the newest tank hero that will wreak havoc in the game. Do you want more information regarding Nature’s Child, Belerick? Stay tuned for more updates!
Next Post Prev Post