-->
You are here: MLPH » Hero Lunox » Lunox Mobile Legends, The Enlightened One Guide 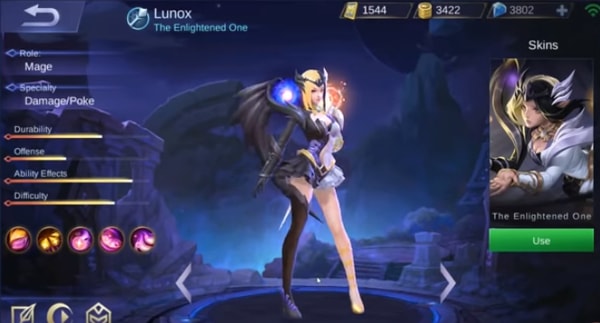 Lunox is a very interesting hero with two powers, both chaos and order, she uses these two in order to win the game and because of that, she has more skills than an average hero, yes, she has 4 abilities, it can be considered common but the average skill count of every hero is only 3 so this is worth noting.

Lunox’s background is really about her spiral to her losing reality and only focused on the light and dark aspects of the things and these are backed-up by her abilities. Which we can talk about later but for now, let’s describe what Lunox is!

Lunox is a mage that can deal poke damage and her versatility goes on since she can also be durable according to her affinities, her first ability has regeneration and her passive in the light side can help her have more resistances, slowing the effect of either physical or magic resistance! This makes her durable against enemy heroes on both ends.

Her offense is not much to be talked about, she is a mage so it’s understandable that she doesn’t have enough physical power to deal enough damage to be considered as serious. Still, this is where she would shine, in the ability effects! As a mage, she needs to have a great sense of control and power in the ability effects and this is proven as her abilities make and break her power. With the dark passive side, she can deal more magic penetration for your spells to be more effective.

Besides, her dark powers give great damage and it can combo as long as you can make it work. Her difficulty is ramped up a bit as mastery is needed to be able to make Lunox a powerful mage, and here’s why.

As explained earlier, her spells are a bit tricky and need practice in order to be great. So her passive talks about 2 sides and when one side is stronger than the other, there are special effects that take place.

The first ability strengthens her light side, this deals AoE or area of effect damage and heals you, clearly a defensive skill for both sustain and clearing your surroundings.

Onwards to the second skill, it deals a single magic ball that increases the dark stack which will be used towards the magic penetration passive, this will probably your main damaging ability and then the third skill is another dark damage that has a fan-shape damage area, however, this does not increase your dark stack.

Then finally, the ultimate has two forms as well, if the light side is stronger, she transforms into an entity that can move across units and deal damage close to her, like an immolation. Her dark ultimate, however, is similar to the third ability but this applies marks to the enemy, these marks would be useful for you to spam the second ability continuously as long as you have mana and it is in range, talk about deadly!

So you see, Lunox’s passive and ultimate has two sides and these sides can be used depending on the situation. You can use the light side to escape and evade enemies, to create jukes and avoid feeding them, defensively, you take the light side, on the other hand, the dark side helps you deal more damage and spam your abilities to finish off enemies, remember that the mark dealt by the dark ultimate can help you use your second ability over and over again until you finish them off, so the dark one is really an offensive method. Know the situation and use spells according to it!

Lunox has lost all sense of time and reality. As a result, she does not benefit from CD reduction effects. When Darkening becomes more severe, CD effects become magic PEN. When Brilliance becomes stronger, CD effects become double resist.

Lunox summons a rain of starlight nearby enemies dealing 220 (+x) points of Magic Damage. The starlight then returns to Lunox, who recovers 44 (+x) points of HP recovery effect is doubled when dealing damage to enemy heroes. Passive Effect Gain one stack of Twilight.

Lunox unleashes chaotic energy forward, dealing 260 (+x) points of Magic Damage and slows an enemy unit. If the enemy unit has a Chaos Mark, then this skill's CD immediately refreshes. When attacking enemy heroes, this skill deals an additional 3.5% of their total HP in Magic Damage. Passive Effect: Gain one stack of Twilight.

Lunox uses a fusion energy to deal 360 (+x) points of Magic Damage in a fan-shaped area, causes a slow effect.

Lunox Unleashes the Power of Chaos in a fan-shaped area, dealing 400(+x) points of Magic Damage. Lunox also leaves Chaos MArks on all enemy units hit by this skill, which last for 4 seconds.

Courtesy: Shinmentakezo YT
And with that we close the discussion and description of Lunox, she clearly is a hero that can be great or not and it depends on the player to help her become strong too.

Will you wield the two sides as masterfully to win the game? It’s up to you! For more information and updates about Mobile Legends, and to Lunox, the Enlightened One, stay tuned for more!
Next Post Prev Post