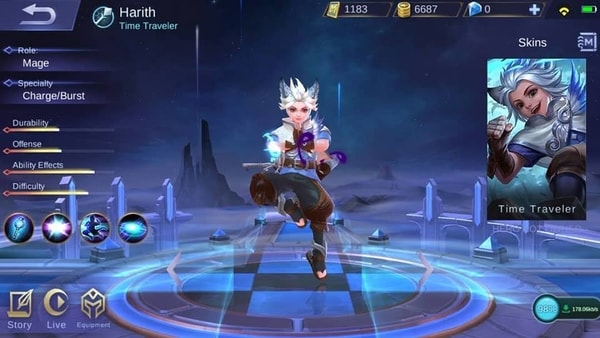 Today we will be discussing about Harith, the Time Traveler, and so if you are interested in knowing more about him, keep on reading!

Harith is a burst/charge mage with almost balanced capabilities as a magic user in the game. As a mage, you would expect a squishy hero that can be toppled down with a few hits of an enemy, but not this one, he is not that squishy than you think according to the durability bar and it is on the middle side so not too bad.

His offense is balanced as well, however that is not the gameplay you should aspire for since the true power of Harith relies upon his abilities as a spell caster. His Ability Effects is something to watch for, it has the highest bar in his overview and can be deadly once someone has mastered how to use Harith. Overall, with the abilities and placement of it, he is a fairly difficult hero that might require a bit of a high learning curve and practice matches before you fully understand his potential.

And as you can see from the previews of this hero, a lot of people have been underestimating his abilities as a mage since the ultimate of this hero is weak and deals little to no damage. However, the thing is that it should not be expected on it. Damage is never the factor of ultimate skill in MOBAs. Harith is a prime example of it.

Basically, Harith’s ultimate is to conjure a cross-like figure and if an enemy is hit by it, his cooldown of his first skill is lowered a bit, giving Harith more time to burst down his enemies with his combo. Also, if you use your second skill inside the cross, your first skill will have more reduced cooldown making more great plays and more chances of delivering a killing blow to the enemy.

Insight from the Key
Passive

Harith gets insight from the key. He immediately gains at most 60% Resilience (depending on the number of enemy heroes nearby). After casting skills for 3 times, Harith next Time Incision deals higher DMG.

Harith blinks to a designated direction, When he arrives, he steals the MAgic ATK of nearby enemy heroes and generates a shield that absorbs at least 300 (+150% Total Magic Power) points of DMG. Harith next basic attack deals 20 (+80% Total MAgic Power) points of Magic Damage and slowing the enemy by 70%. When this attack hits an enemy, reduce the CD next TIme Shift by 4s.

Harith uses the Key to summon the MAtrix of Time. When the Matric shows up, the nex CD of TIme Incision will be Reduced by 4s. The Matrix then immobilizes enemy heroes nearby for 1.2s and slow them by 50% for a period of time. (If Harith comes intp contact with the Matrix when using Time Shift, he will absorb the energy within, so as to reduce the CD of next TIme Incision and Time Shift by 2s/4s)


People have been thinking his combo the wrong way since they think that ultimate skills should always be damaging or devastating to the enemy.

However, in Harith’s case, his kit focuses on his reliability of hitting the first skill, if the player hits the ultimate, then first skill, dash to the cross, then another first skill, the damage would be strong especially if Harith is fed in the game.

Not to mention, the ultimate is a form of CC and soft CC, an immobilize and slow, respectively, giving the player more time to hit the first skills with ease. The lesson here is that, not all abilities should be amped to damage, but the usability of it in a situation is much more important.

A mage that can use time, to spam abilities and chase down enemies, that is what Harith is. Are you ready to use the Time Traveler in the Land of Dawn? For more information about Harith and the game, Mobile Legends, stay tuned!