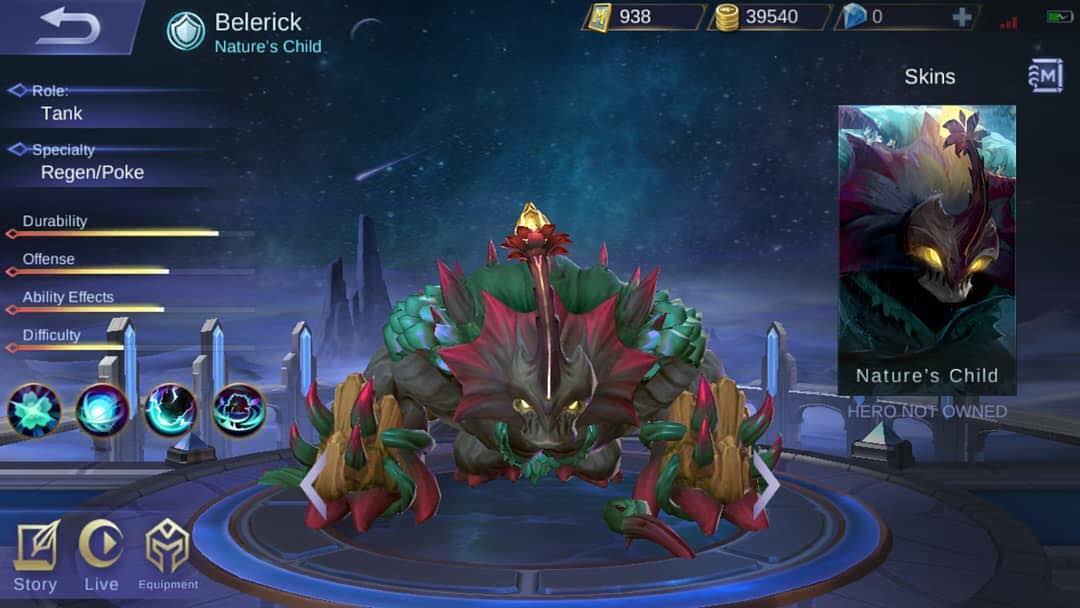 Belerick has a strong natural ability on durability, after all, he is a tank so that is his main priority, but it is also nice to note that his spell abilities and offense is on a high note as well, making him a powerful tank to behold once built right, and that is what we will do, to build him right, here are the items!

There’s no mistake in selecting this as your items, in fact, as one of your core items. Blade Armor gives Belerick, the strength and the durability to survive attacks coming from the enemies, not to mention that Blade Armor’s passive gives the enemies of Belerick receive damage as well, making sure that those enemies won’t try to pick a fight with him, especially if it’s a duel, a one versus one!

Being a tank, you are expected to absorb and survive heavy hitting against the enemies, your goal is to make sure the carries don’t die first, so you need armor and health to survive. Boots is essential to every hero, but Warrior Boots fit for Belerick, it is a great boots for him since the armor is perfect and the passive makes Belerick more tankier, perfect for a tank, right?

Now, Belerick requires a lot more healing power and shielding power, his regeneration can be great if improved more and this is where the item, Oracle shines. Not only does it raise HP regeneration and shield absorption rates but it also gives him health, which is vital for Belerick. Also, another good thing to note is that Oracle gives him magic resistance, something he needs when dealing with mages.

Another regeneration and health item which is perfect for Belerick. With this, he can maximize the potential use of his passive skill! Belerick is a natural tank as well so if he can increase the usability of his role and regenerate more health outside of the fight so he can return to the fray again is a useful way of taking this item’s strengths into consideration.

This item helps both in terms of defense and offense. First, in defense Belerick will gain HP and Magic Resistance which is very useful for tanks to increase the amount he can absorb for his team, and also to increase his survivability in fights. But with Cursed Helmet’s passive, it grants another way for Belerick to deal more damage, with more HP he gets, the more magic damage it can bring to the enemy, so if you want to deal damage as Belerick, this item is a no-brainer.

Like Cursed Helmet, this item gives health and magic resistance but also, this item can resurrect you to help you come back from sticky situations, avoid feeding the enemy and save your teammates in the nick of time, some people say that this item is more effective on carries than tanks, but with this item, not only will the enemies have a rough time in taking him down, he can also escape and avoid a gold increase to the enemy.

The focus on these items are on the two things that the tanks should have, increased armor, magic resistance for tanks to become stronger to resist magical attacks from mages, physical attacks from fighters and damage carries and also mixed attacks from assassins.

Belerick will also have great regeneration to recover from absorbing tons of damage, and he can also become a deadly force with the thorns effect from Blade Armor and Magic Damage per Max HP on Cursed Helmet.

These items together with a chance to be revived will be great for a tank hero like Belerick and with the proper usage and mastery, Belerick and be a forced to be reckoned with.

Remember that these items are not really set in stone, some builds may fit others and some may find this not good but with these items, Belerick can have his potential be increased further and for those who want an offensive tank with powerful defenses, then Belerick is the hero for you! For more information about Belerick and the game, Mobile Legends, stay tuned!
Next Post Prev Post