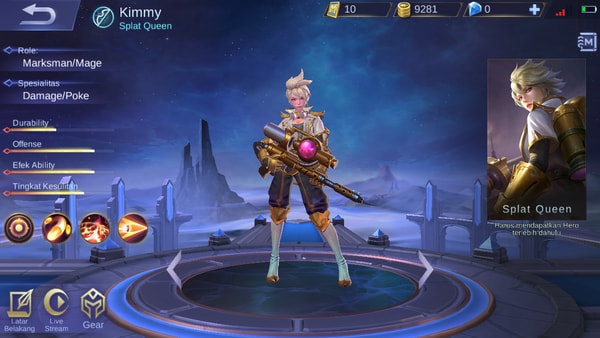 Kimmy is an interesting hero with a little bit more interesting kit. First of all, she is a hybrid of two interesting roles, mage and marksman, meaning she can deal magical damage and physical damage at the same time since those two have contrasting damage types.

This could spell good or bad for a player that either knows what to prioritize or not. Another thing that can be interesting at her gameplay is that she auto-attacks automatically, you don’t need to press the button.
She has a controller that lets you attack continuously and yes she can miss since she does not have an auto-aim and it might really sound unfair if she does have, considering her attacks are Area of Effect. Another fun fact, she is the second hero who can attack and move at the same time!

First was, of course, Irithel, but Kimmy is slightly different since she has new mechanics players need to work around.

Her skill set is pretty interesting as well. Her first two skills are only enhancements to her auto attacks, which does not need mana at all, then the other two skills need mana. Pretty interesting to see what unfolds when it has been released live and which tactics will the players once it is available. Some see her as a strong and overpowered hero that might wreak havoc in the game once she is released but some have their doubts since she can be hard to pick up, which I can agree.

People should really stop saying that Kimmy is overpowered even if she has not been touched by these players. The strength of a hero in this game requires knowledge and it depends on someone’s play style.

Kimmy has a hard play style since she can attack and move but also requires to know which items to use, would it be magic or physical?

However, if the player knows how to play her, she can be a very versatile pick. Once mastered, pro players can decide to pick her up and make some fancy strategy since she can fit both roles and can unleash great amounts of damage once she gets fed. However, new players that just wants to try or some that wants to learn how to be great at her should not use this hero directly at rank since you will only make the other players annoyed if you feed at the game and you might not want the consequences!
Either way, Kimmy will be a unique hero that will be a fun one once she gets released at the live servers. Only time will tell if she will become the strong monster as everyone expects to be or someone who will be just a standard hero in their eyes. For more information about Kimmy and the game, stay tuned!
Next Post Prev Post