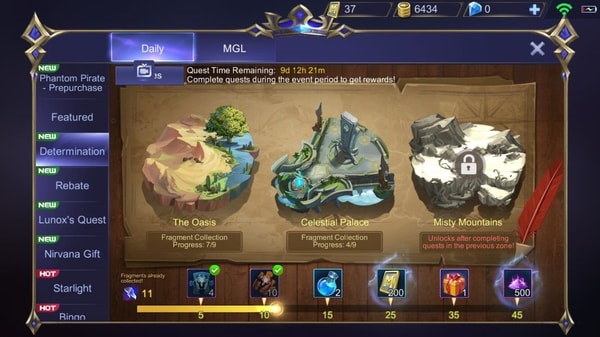 As per every hero release in the Land of Dawn, there is always more lore to offer and it is very important especially in games like Mobile Legends, where various stories and lives clash one another for their benefit for better or worse. However, Lunox’s story is indeed interesting as it involves a quest line that will surely give interest to those who loves lore in a video game.

Lunox’s storyline tells about her adventures as to how she became enlightened. There are three areas where you need to fulfill various objectives in order to gain “Memory Fragment”, by gathering them slowly, you will gain more insight regarding Lunox, the first opened area is the Oasis where Lunox first heard the voice and Belerick assisted her in her journey.

Slowly, you will gain some cutscenes where Lunox and Belerick interact. There are other two areas namely “Celestial Palace” and “Misty Mountains”, these areas are eventful for Lunox so for those who want more information should proceed to the quests.

The objectives that need to be achieved are random and can be anything ranging from buying stuff from the shop, playing games, getting a certain amount of kills, even recharging your diamonds. It may be tough for others but for the aficionados of the game should really try and finish the quests.

Memory Fragments can be used to redeem awards. These awards are not seen yet but we can expect more from the game so keep on playing. Finally, just doing the objectives can gain you more rewards ranging from skin and hero fragments to magic dust and even magic wheel potion. It’s very rewarding to those who are avid fans of the game.

And that’s all we got from the Determination Story Line, Lunox is indeed one of the interesting characters in the game so we could expect more to know about her and why she became that way, aside from the story the game gave us though. For more information regarding the quest line and the game, Mobile Legends. Stay tuned!