-->
You are here: MLPH » Hero » Minsitthar Hero Overview and Description 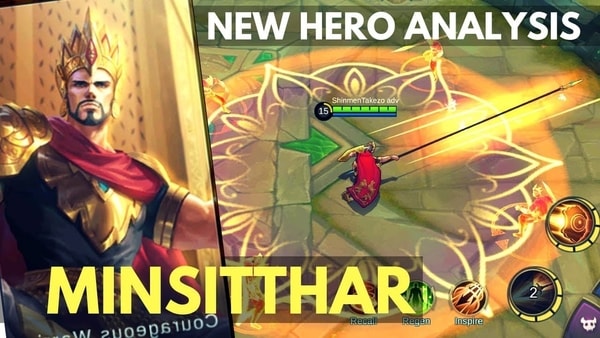 Minsitthar is the featured Myanmar hero of the game, just like Yi Sun Shin, Lapu-lapu and Gatotkaca, however deeper research yields no hero named Minsintthar but a redditor said it was based on Kyansittha, a famous monarch of the Pagan Empire of Burma, the former name of Myanmar. Although before his ascension, he was a general at first, in which we can base the design of Minsitthar in the game.

Being an initiator with crowd control abilities, Minsitthar is obviously high at offense and durability levels, he charges in and ensures the team fight so he needed those really well. However, his abilities really can change the game so let’s describe the abilities.

His passive, All United, gives 80 gold every time an enemy is slain by Minsitthar’s allies. However, if he is the one that killed the enemy, then an additional 20 gold will be given to his allies. It’s a pretty straightforward skill that can help the team in early situations, and maybe in the middle game.

His first skill, is called Spear of Glory, is a CC ability that can pull an enemy towards Minsitthar. First, he stabs the spear on the direction he chooses then it will deal AoE damage and pull in the first one that got caught in the spear, dealing additional damage. This can be great in picking up those who are trying to escape or to help the carry in securing kills.

His second skill, Shield Assault, gives him a shield to block enemy damage, and this also bashes the one in front of Minsitthar, if the enemy is bashed, it will be stunned for a second and those who are behind the stunned enemy, will be knocked back. It’s a good tool to secure a kill since it will remove those who will try to help the stunned one and can also make escapes due to the stun ability and the knockback to deter those who will give chase.

There are combinations that can be used to maximize Minsitthar’s usefulness in the game. First, cast Spear of Glory to get the enemy hero you choose to attack, then after pulling it in front of you, use Shield Assault to stun the enemy, letting your team attack it or for you to finish it, if it escapes, cast King’s Calling to ensure a kill.

This can also work on a teamfight. You can pick up the enemy carry with Spear of Glory then Bash it with Shield Assault. Once the carry is in danger, the enemy team will try to rescue their carry, this will be the perfect time to use King’s Calling to trap the enemy in the arena for the guards and your team to decimate them.

Since Minsitthar is an initiator, it would be wise for him to have tanky items to ensure his survivability, being tanky is important if you want the team to maximize your efficiency in pulling in enemy heroes and securing the team fight with your ultimate.

However, it can be also great for Minsitthar to have damage items in his disposal. A bruiser type of build, which consists of health and damage is not so bad for him as he can deal damage enough to finish the teamfight early and health to last long to clean up the fight.

Anyways, we will be watching as to how the Courageous Warrior, will dominate the Land of Dawn. He’ll be out in the advanced server to test him out, so if you have an account there, be on the lookout and when he will be released there.  And for more information about the newest heroes and content of Mobile Legends, stay tuned for more!