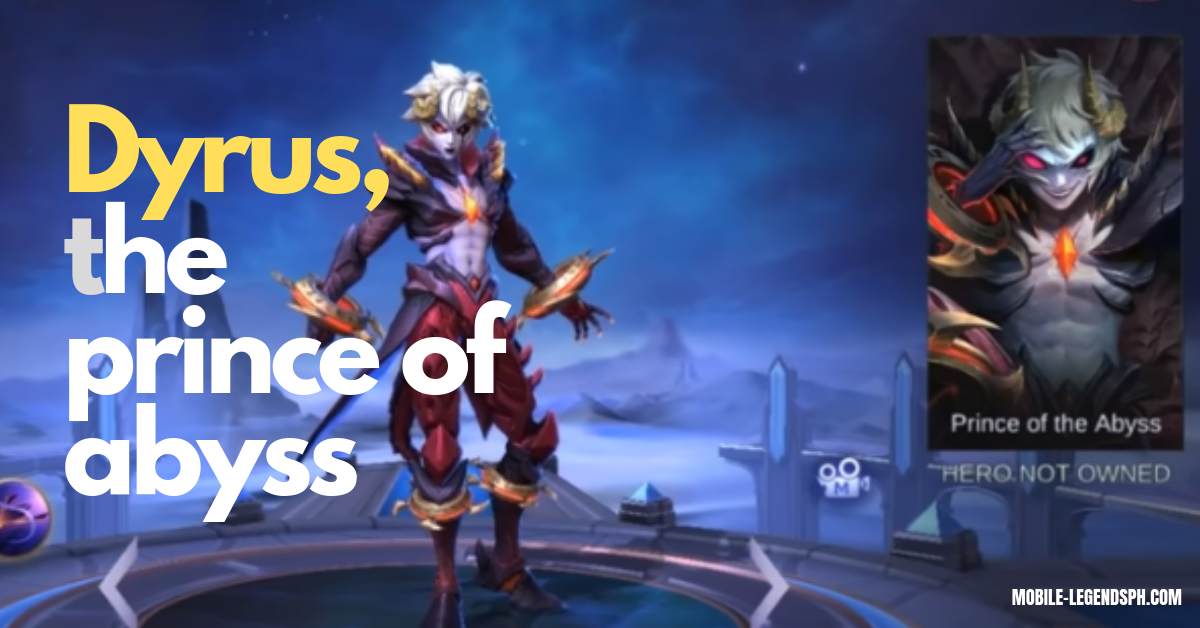 It seems that Mobile Legends is not done with releasing heroes in their game, after its continuous release of heroes, it shows how many diverse and unique characters they can fit in the game, but this new one is indeed vital both to the game and to the lore.

So let’s discuss it in earnest, presenting Dyrroth, the Prince of the Abyss.

Dyrroth is a fighter with a specialty of being a charge and bursty character. As a fighter, expect that his offensive capabilities are one of the highest proficiencies in his bars, he also relies on his abilities to deal damage and score some kills to the opponent.

However, he is not the bruiser type of character so don’t go ahead and just face 5 heroes at once and make sure to wait for your initiator to lead the charge.

Passive: Wrath of the Abyss:
When Dyrroth,’ rage reaches 50%, it will enhance Burst Strike and Spectre Step. After every 2 basic attacks, he will deal with a circle basic attack, dealing damage for those in the circle.

When enhanced, it will have longer range and greatly increases the slow of the ability.

Second Skill: Spectre Step
Dyrroth dashes in a direction and stops when it hits an enemy hero or creep, dealing damage and slightly knocking up enemies, then he can move to the direction where the left joystick was aimed after hitting the target.

When enhanced, it will knock up the enemy and move it to the direction of his left joystick and deal much more damage.

Ultimate: The Destruction
Dyrroth quickly charges and release a fatal strike, dealing a huge amount of damage to enemies and slows them down by 80% in 1 second.

These abilities are potent for a hero like Dyrroth. As a burst fighter, he must be able to catch up on enemies and continue dealing damage while casting various spells to take down enemy heroes. Knowing when and what abilities to strike is vital.

You can use the enhanced version of Spectre Step to carry the enemies back into your teammates to a secured kill while if you have your rage bar at 100%, you can use the two enhanced abilities in order to get one of the enemies, which may force some team fights, just be sure that the one you will be initiating is a winnable one, or else, you might lose the trade and give the enemy a strategic lead.

With the proper items and a mastered skill in fighters, a player can find Dyrroth to be a great pickup for their hero pool. He has great fight potential especially with his knock ups and slows that can guarantee a kill or two in team fights. A properly placed ultimate strike can lead to multiple deaths especially if the health of the enemy heroes is low enough.

We will know how Dyrroth will be strong once it hits the live servers and be tested by the players but this is exciting for those players how like this kind of play style.

For more information about Dyrroth and the new heroes of Mobile Legends, stay tuned!