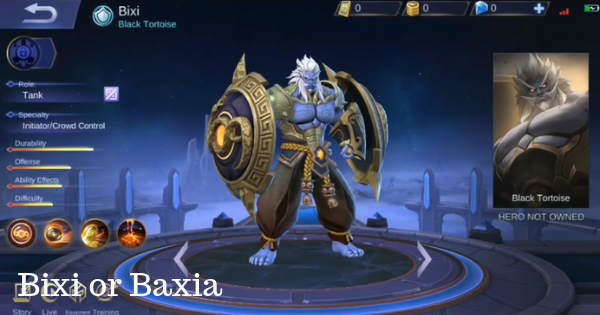 Finally, a tank has been released, and some people are anticipating this hero and we can see why once we talk about this tank as we deep dive in with Bixi or Baxia, the Black Tortoise. Tank players rejoice as you will have a good time reading this article, why? Just keep reading to know more!

Bixi/Baxia is a tank that focuses on crowd control and initiation, it is fitting for him since his abilities really start up the fight and intensifies it to the extent that his contributions will deter the enemies in the fight.

As you can see in his affinities, he has high affinity on durability and offense that got people talking that Bixi/Baxia might be a fighter and not a tank gave the proper loadout but let’s focus on the tank aspect for now as it is the role that is given to him.

Another worth mentioning is that he has a high ability effect meter as well, given that he has a reliance on his spells to become a beast, it is only necessary.

Now in order to know how great Bixi can be in battle, you need to check his abilities.

Bixi is known now to the Mobile Legends Community as the Anti-Regen Hero and he has the right to uphold that name due to this ability.

If Bixi/Baxia hits an enemy Hero with a spell, it will reduce their regeneration effect by 50% for 4 seconds, meaning if you see someone that is using regen ability, you can pop a second skill and if it hits, it will stop them from regenerating, both mana and health, this is pretty advantageous in a long fight.

They will lose steam quickly if they don’t have enough mana and health to support their skills, this may lead them to run and escape or panic, as Bixi use this in order to make those things happen.

This is Bixi’s first skill, where he turns into a ball and accelerates forward, gaining movement speed and when hitting an enemy hero. 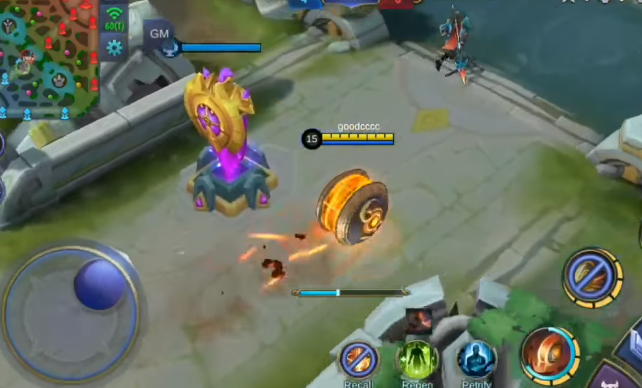 It will deal damage and stun for 0.5 seconds, however, you can recast the first skill so you can jump across enemy minions, obstacles such as walls and towers. If you hit an enemy hero while landing in a jumping position, you will have increased damage and a longer stun for a second. Jungle minions will still stop you from using your skill, however.

Knowing this means you have a chase, escape and bait ability, but more on the earlier two.
You can chase enemies and stun them so that the team can pick on the enemy once it is stuck at its place, this can also be a team fight initiator where you stun one and your teammates respond quickly in order to kill the enemy hero, causing the enemies to support it leading to a team fight.

However, in a pinch, this can also be your escape tool in order to get out of a gank, unscathed. Whatever you do, this is a good movement skill that is very versatile for Bixi

The shield has more ways than one in terms of use, Bixi can also throw the shield forward to deal damage to an enemy marking them for two seconds. This is Bixi’s poke ability, which can be further strengthened if you choose to make Bixi more of a fighter than a tank. But using this ability is great since you mark the enemies stopping them regenerating their health and mana.

This skill can also be used again if it hits the enemy, it gains an 85% cooldown reduction, allowing you to spam the shield as long as you please. Bixi’s main damage aside from his basic attacks will go to this skill.

Finally Bixi’s/Baxia ultimate, which can be used more ways than one if you play your cards right. Bixi deploys his frontal shield and dashes forward, increasing his movement speed by 30% but also making a path of lava along the way which damages enemies and marking them.

The damage from the lava might be minuscule but the important part of this is that the marking of the enemy will reduce their regeneration ability and damaging them continuously.

A prolonged fight is the goal of the Bixi/Baxia as he can deal more damage the longer the fight is. Ideally, if the enemy heroes are closer together, this ability can be abused by going around them and just marking them while your carries dish damage supporting them by weakening the enemies.

This too, can be combined with your first skill, while doing the first skill, you can apply the ultimate when it is needed, so if you are closer to the team fight you can start activating the ultimate gaining you more speed and jumping at them for more damage, stun and marking them with your lava path.
This also can augment your chasing ability as you speed up while you are using your ultimate, chasing them and ultimately stunning them or making sure that your teammates come in and secure
the kill.


Potential for being a fighter

With his high offensive capabilities, it is undoubtedly that he can go be a fighter than a tank, he can deal damage hard with his basic attacks and his second skill can be spammable and if you increase your physical damage of it, you can abuse it to kill enemies faster.

With his tankiness, Bixi can be classified as a bruiser especially with the anti-regen abilities that can make him take more punches than the usual tanks, making him more useful than the common tanks that can just bring health and armor. Bixi can offer a lot more than them.

When trading, you can start off with a second skill to mark them and deal damage to them by going closer and simply attacking them, you can use your first skill but it is your call whether to use it or not, the stun is worth it and if you can go behind and jump on them, it will be more advantageous than just simply ramming him directly.

You can ambush enemies and assist teammates that are being ganked with your first skill since you can jump through towers, walls, and enemy minions, you can jump in the fray no problem and stun the enemy giving your teammate a chance to reposition or slowly retreat them being enemy fodder.
The ultimate can be used in a variety of ways.

If two or more are closer to each other, jumping them and using the ultimate can be more effective as it deals them damage over time making them susceptible for quicker deaths due to your ability of not allowing them to regenerate their health and mana.

With a flexible tank like Bixi or Baxia, this should give tank players and maybe even fighter players the power to micro an enemy or contribute to the big fight by making sure that the enemy heroes die slowly and surely. And that’s all we have for Bixi / Baxia, if you want to learn more about him and the upcoming heroes in Mobile Legends, stay tuned!